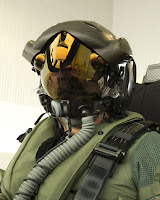 It’s been said that the F-35 Joint Strike Fighter might be the last manned fighter built in this country, and that future combat aircraft will be unmanned. That’s yet to be seen, of course, but unmanned fighters are in the works.

But one thing is certain: The pilots who fly the F-35s will have a capability that can’t help but make you think of a robot. All the pilots of F-35s will don helmets that will allow them to keep track of critical information no matter where their head is pointed. These helmet mounted displays are replacing the heads up displays of “old.”

Defense Industry Daily has a detailed story on the Gen II Helmet Mounted Display, which is an integral part of all the American and export versions of the F-35s. The helmets are a significant advance over the heads-up displays that entered widespread military use in the 1970s. The old system superimposed range and targeting information on a clear pane of glass in front of the pilot, so they didn’t have to look down at instruments. The F-35s don’t have HUDs, and instead opt to make the display part of the helmet system.

Like the HUD, HMDS allows the pilot to look outside the cockpit at all times. But unlike the traditional HUD, the pilot doesn’t have to be looking forward. The new generation helmet adds functions like sensor imagery/synthetic vision, threat alerts – and even full 360 degree awareness. (Story)


Weapons
While on the subject of next generation systems and weapons, a high-powered laser was successfully fired for the first time from the Advanced Tactical Laser aircraft during a test conducted by Boeing and the 413th Flight Test Squadron of Hurlburt Field, Fla.
The ATL is the 46th Test Wing's modified NC-130H. The laser was fired over White Sands Missile Range, N.M., and hit a ground target. The ATL program is managed by the 687th Armament Systems Squadron, part of the 308th Armament Systems Wing at Eglin Air Force Base, Fla.

Leadership changes/bases
During the week there were two leadership changes at Eglin Air Force Base, Fla. Col. Kenneth Echternacht was installed as the new chief of the Air Force Research Laboratory’s Munitions Directorate. The directorate performs research on precision guidance, missile guidance and control, computational mechanics, smart sub-munitions, warheads and explosives. Earlier in the week, Col. Michael Gantt assumed command of the 53rd Wing. The 53rd reports to the Air Force Warfare Center at Nellis Air Force Base, Nev.
-
- Bases in this region face changes in the number of personnel. Hurlburt Field, home of the U.S. Air Force Special Operations Command, will get an additional 435 military and 79 civilian personnel. Eglin Air Force Base, which will become home of the Joint Strike Fighter Training Center, will increase by 123 military and 302 civilians. But Tyndall will see close to 600 military and four civilian positions. It's part of the 2010 restructuring plan, which still has to be approved by Congress.

Unmanned systems
During the week Northrop Grumman unveiled the next-generation Global Hawk. Called AF-18, the RQ-4 Block 40 Global Hawk uses the MP-RTIP sensor, the first time the active electronic scanned array technology has been used on a high-altitude unmanned aircraft. AESA technology provides all-weather, day-night synthetic aperture radar mapping and ground moving target indicator capability. AF-18, scheduled to begin flight testing next month, had sub-assembly work done in Moss Point, Miss., at the Unmanned Systems Center.
In another Global Hawk item during the week, the Air Force awarded a contract to Northrop Grumman for $276.3 million to provide the rapid fielding and support of a communications network for military drones – the Battlefield Airborne Communications Node System. The system will be installed on three Bombardier BD-700 Global Express and two Global Hawk Block 20 aircraft.
Tanker
The Pentagon may yet consider buying aerial tankers from both Boeing and Northrop Grumman, according to Rep. John Murtha, head of the House Defense Appropriations Subcommittee. He said new acquisition chief Ashton Carter said the Pentagon is examining data on a split buy. "He said, 'We're looking at it. We're going to see what can be done,'" Murtha told reporters. Murtha remains convinced a split is the only way to avoid protests or delays. Northrop Grumman and partner EADS plan to build the tanker in Mobile, Ala., if they win.
Space
The commission reviewing NASA’s human space flight visited Huntsville’s Marshall Space Flight Center and Decatur’s United Launch Alliance rocket plant in Alabama during the week, and also plans to visit Michoud Assembly Facility in New Orleans. The panel, created by the Obama administration, is taking a long, hard look at the plans to return astronauts to space. Part of that includes looking at the vehicles that are being developed to get them there. Michoud is the location that was chosen to manufacture the Constellation Program’s Ares I upper stage.
- Astronauts from the STS-125 mission to repair the Hubble Space Telescope shared accounts of their mission during a visit to the StenniSphere, the visitor center at John C. Stennis Space Center, Miss. The crewmembers thanked Stennis employees for their contributions to the mission. The astronauts spent five days conducting five spacewalks to provide upgrades to the telescope as part of their 14-day mission aboard space shuttle Atlantis.
Airports
Louis Armstrong New Orleans International Airport has launched the first of what will be $350 million in improvements to modernize the facility and create about 7,000 construction jobs. The most expensive project is a $114 million rental-car facility with 1,800 parking spaces.
Meanwhile, plans are inching along to develop land near the airport. To make dozens of scattered acres of vacant airport-buyout land more attractive to developers, the New Orleans Aviation Board has consolidated it into eight parcels. A request for proposals is in the drafting stage. The airport bought the land and razed houses beginning in the mid-1990s as part of a noise-mitigation lawsuit, but it has remained vacant. But the Federal Aviation Administration has directed the airport to submit a plan by October for using the land.
- Speaking of Louis Armstrong Airport, the AeroMexico nonstop flight between New Orleans and Mexico City that begin next month will encourage business ties between Louisiana and Mexico. That’s what experts said at a forum sponsored by the World Trade Center. The direct flight lasts two hours and 20 minutes and begins service from New Orleans on July 7.

- On the subject of flights, American Eagle will resume a fourth daily round trip between Mobile and Dallas/Fort Worth International Airport starting Aug. 1. Traffic has picked up in Mobile. May saw 2 percent more passengers through the airport than in May 2008, the first time since February 2008 that traffic grew year over year.
Contracts
In addition to the Northrop contract mentioned above, there were other contracts awarded during the week that are of interest to the Gulf Coast Aerospace Corridor. Raytheon Missile Systems was awarded a $9.7 million modification to a contract for the Advanced Medium-Range Air-to-Air Missile Intercept Missile (AIM)-120D program. … The Air Force modified twice a contract with Jacobs Technology to provide technical, engineering and acquisition support at Eglin Air Force Base, Fla., and various other tenant organizations. One modification was $17.3 million, the other $25 million. … BAE Systems was awarded a $9.8 million modification to a previously awarded contract for the procurement and installation of a 55 civil global positioning system with electronic flight bag for the C-130T aircraft. Ninety percent of the work will be done in Crestview, Fla.
at 12:04 PM

David Tortorano
Gulf Breeze, FL, United States
David Tortorano, a journalist with more than 30 years experience, is an award winning reporter and editor who has covered the Gulf Coast region for years. He was on the Biloxi Sun Herald reporting team that won a Pulitzer in 2006.