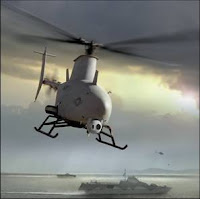 If you had any doubts about the growing role of unmanned systems, consider this: the Marine brigadier general responsible for capabilities development said during the week that the Marine Corps wants an unmanned cargo helicopter, possibly within a year, to resupply troops at isolated bases in Afghanistan.

Brig. Gen. Andrew O’Donnell, capabilities development director for Marine Corps Combat Development Command, envisions a UAV that could carry up to 1,000 pounds of food, water, ammunition and other supplies.

He said there are plenty of dangers on Afghan roads, and cargo robots would take a lot of Marines off the roads. O'Donnell told Marine Corps Times that several companies and the Army had expressed interest in the cargo helicopter. Marine Corps officials hope they'll be able to field such a UAV in Afghanistan within the next two or three years, although he said it might be possible to have one a year from now. (Story)

The Navy and the Army already have one large unmanned helicopter system, the Northrop Grumman Fire Scout. The Navy version will be ready for an initial deployment test later this year, paving the way to full-rate production, possibly before 2010. Two Navy Fire Scouts will deploy last this year from the deck of the guided missile frigate USS McInerney. (Story)

The McInerney is homeported at Mayport Naval Station in Jacksonville, Fla., and the newspaper there had a story during this past week about the Mayport-based detachment involved in working with the Fire Scouts as well as the Broad Area Maritime Surveillance program, which will use Global Hawks. In addition to highlighting those two programs, it provides a good overview about the Navy’s interest in unmanned systems. (Story)

The Fire Scouts and Global Hawks are built in part at the Unmanned Systems Center in Moss Point, Miss. Both aircraft provide intelligence, surveillance and reconnaissance, or ISR, a field Defense Secretary Robert Gates emphasized in the budget he proposed April 6.


Tanker
The Pentagon plans to reopen the competition this summer to replace the Air Force’s aging fleet of KC-135 aerial tankers. That’s what Gates announced during the week when he released his proposed defense budget. Gates still wants to go with one supplier - either Boeing or the Northrop Grumman/EADS North America team.

But Rep. John Murtha of Pennsylvania is spearheading an effort to get the Pentagon to buy from both companies. During the week, Jeff Immelt, chairman and chief executive officer of General Electric, expressed support for the split buy. He told The Enquirer newspaper in Cincinnati that Murtha’s compromise may be the best way to get the much-delayed program on track. GE makes the engine selected to power the Northrop/EADS KC-45 tanker.

But Immelt, a member of the president’s economic recovery advisory board, said buying from both companies could provide an economic stimulus joint. No doubt it would benefit several states. Northrop/EADS plans to assemble its tanker at a $600 million, 1,500-worker plant in Mobile, Ala. And getting a piece of the tanker project - as Murtha pointed out after his visit to Mobile, would open up the possibility of EADS company Airbus building A330 cargo planes at the site.

In another tanker-related matter, Mobile County Commissioner Stephen Nodine wants to restart the “Keep Our Tanker” web site, now that it appears the competition will begin again. Nodine hopes to use $62,000 in education funds to upgrade the site with a link schools. He wants it to promote technical training and bring awareness to local jobs in aerospace and shipbuilding, according to a report during the week by Mobile television station WALA.

Lest anyone forget, Boeing does have some interests in the Gulf Coast region. It has operations in New Orleans and in Northwest Florida, and suppliers as well. One of those suppliers, Fort Walton Machining Inc., was among nine companies named by Boeing as 2008 Suppliers of the Year. It was chosen in the diversity/veteran owned small business category.
F-35
Gates’ proposed fiscal 2010 budget also calls for putting more money into the F-35 Joint Strike Fighter program, as well as ending purchases of F-22 Raptors. The F-35 is of course of high interest to the Gulf Coast because Eglin Air Force Base, Fla., is the designated home of the Joint Strike Fighter Training Center.
Lockheed Martin during the week was awarded a $41.2 million modification to a previously awarded advance acquisition contract for long lead materials and effort associated with the F-35 Low Rate Initial Production Lot IV procurement of three additional Navy carrier variants and one United Kingdom short take off vertical landing variant. There are three varants of the fighter.

Okaloosa County during the week filed suit in circuit court against the city of Valparaiso, seeking to torpedo that city’s suit against the Air Force over the JSF Training Center. Valparaiso is suing the Air Force because of concerns over the noise of the F-35. Okaloosa County, and others, are afraid Valparaiso’s suit is jeopardizing the center, which will have a $350 million impact through construction alone.
Speaking of Eglin, civic leaders from 20 states got an in-depth view of Eglin and Hurlburt Field's national security programs during the National Security Forum Alumni Tour held earlier this month. More than 50 community leaders looked at the McKinley Climatic Lab, the Air Force Research Lab's Taconi Room and Air Force Special Operations Command's Special Tactics Training Squadron at Hurlburt.
Competitive disadvantages
Long-time aerospace giant Washington State is falling behind other aerospace manufacturing centers in competitiveness. That’s according to a Deloitte Consulting study released to Washington Gov. Chris Gregoire and several members of the legislature.

On the plus side the state, compared to the rest of the group, has a large skilled labor workforce, the most engineers, the strongest research university, the highest quality of life, and relatively cheap property costs. On the negative side are relatively high wages, sales taxes, and unemployment and workers' compensation costs. Recent labor strikes is also chalked up as a disadvantage. (Story)

Washington’s governor wants a new task force to keep Washington in the hunt for future Boeing jobs, but she isn't yet calling for additional tax breaks that industry consultants say are key to more aerospace work. If approved, the Council on Aerospace would bring together leaders from state government, the aerospace industry, organized labor and higher education.

The council would be charged with coordinating job training, research and academic programs that aerospace leaders want, and regularly advising the legislature and governor on ways to keep Washington competitive in the aerospace sector.

Although Boeing moved headquarters to Chicago, Washington is the location of its major assembly plants at Everett and Renton, with other plants and offices scattered throughout the Puget Sound area. (Story)

Airports
International air service will return to Louis Armstrong International Airport in July. AeroMexico will begin offering nonstop flights to Mexico City from New Orleans July 6. The flights will operate six times a week. AeroMexico will be the first foreign line to operate out of New Orleans since Hurricane Katrina.
New Orleans and Louisiana in general have stable aviation business, aviation consultant Mike Boyd said during the Louisiana Airport Managers & Associates conference. Part of the reason is a higher demand in Louisiana for air service.

Aviation center
A foundation that wants to build a flight academy at the National Museum of Naval Aviation has raised $17.5 million for the four-story building. Now it’s trying to raise the $8.8 million for equipment.

The National Flight Academy is designed as a five-day camp that teaches middle and high school students science and technology in a Navy-themed setting. Some of the most expensive equipment for the carrier-themed facility will be flight simulators. A group in South Mississippi is also raising funds to build a science center, called Infinity, near Stennis Space Center.


Contracts
In addition to the Lockheed contract noted above, there was at least one other contract awarded during the week with a Gulf Coast connection. BAE Systems was awarded a $22.4 million modification to a previously awarded contract to exercise an option for maintenance, logistics, and life cycle services in support of communication-electronic equipment/systems and subsystems for various Navy, Army, Air Force, Special Operations Forces and other federal agencies. Two percent of the work will be done in Fort Walton Beach, Fla.
at 12:04 PM

David Tortorano
Gulf Breeze, FL, United States
David Tortorano, a journalist with more than 30 years experience, is an award winning reporter and editor who has covered the Gulf Coast region for years. He was on the Biloxi Sun Herald reporting team that won a Pulitzer in 2006.